The Case of the Fake Shemp

In the course of our posts on the Three Stooges and Columbia comedies, we have mentioned the Columbia "chicanery". This is no more apparent than in the Four Stooges shorts made after Shemp's death. The chicanery included liberal use of stock footage and music, numerous remakes of previous shorts, actors being brought back to film new scenes and when not available being doubled in body and voice. Sometimes a character actor even played two roles in the same film (with the help of makeup and costuming). 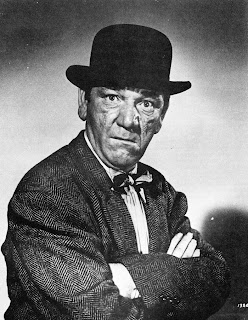 By 1953 the bulk of the Stooges' shorts were remakes of earlier comedies with the boys filming a few new scenes to give the look of a fresh short. (The casual moviegoer wasn't aware of these tricks). When Shemp passed on from a sudden heart attack in November 1955, the studio still had four comedies to be produced for release in 1956. Instead of giving Moe and Larry some grieving time and perhaps wait for a new partner, the show went on and four bogus shorts were produced with Shemp still a member of the team! Four remakes of earlier Shemp comedies were produced with some new scenes by Moe and Larry, a lot of Shemp stock footage and some scenes using a double for Shemp! That was longtime supporting player Joe Palma. The double was only seen from the back so as not to give away the ruse.

The first of these "bogus" shorts was Rumpus in the Harem, a remake of Malice in the Palace (1949). Moe and Larry carry the early scenes with their girlfriends setting up the plot. (Shemp has conveniently gone to open their restaurant). It's mostly stock footage for a while. Then Palma appears as "Shemp" for the traditional Stooge huddle with his back to the camera, of course. Longtime Stooge foil Vernon Dent appears via stock footage. He had retired from acting due to illness.

The rest of the film follows the original plot of getting the Rootentooten diamond and encountering the Emir of Shmow and his huge bodyguard. To pad things out Moe and Larry have a lame encounter with some harem girls. During the films' climax "Shemp" is being chased by the guard with lots of stock Shemp voiceovers and his heep-heep-heep cry (at fast speed). It's all pretty lame and Palma keeps his face obscured. We end with the standard Stoogers run away and scream ending, except Palma gets to do his own "Yipe!" I guess they didn't want to dig out another Shemp voice track. All in all, a pretty lame and obvious start to this canon.

Next up was Hot Stuff, a remake of Fuelin' Around (1949).The "Shemp" bits in this film are really lame . The film opens with the boys as spies, wearing beards to help hide Palma. When Moe instructs "Shemp" to follow a suspicious female, Palma grunts, "Right!" and scoots off in a Shemp-like duck walk. Then Moe and Larry go through another silly encounter with two female officials, again-to mark time. It's to their credit that they were able to carry off these scenes, knowing poor Shemp was gone. Stooge regulars Vernon Dent, Christine McIntyre and Emil Sitka appear via stock footage. (Emil was still working with the boys at Columbia). Palma's routines are his silliest yet. At one point he flaps his arms and does some of Shemp's heep-heeping (with his own voice). He then goes to guard a door (with more heeping) and gets conveniently knocked out, while Moe and Larry carry another new scene. He then returns for a brief wrap up. We return to stock footage for the film's climax. This one really shows it's patchwork "chicanery."

Scheming Schemers is one of the wildest patchwork films the studio put out, yet it works as a fresh film for the non-stooge fan. Editor Harold White (Jule's son) should have received an Oscar for his editing work. Footage from three earlier films were worked into the story along with various voice overs and doubles.

The film is basically a remake of Vagabond Loafers (1949), a great gag title from a Rudy Vallee hit, Vagabond Lover. It was a remake of the Curly classic, A Plumbing We Will Go (1940). Many of the original plumbing gags are reprised. In the Shemp version the boys are working at the Norfleet estate. Emil Sitka reprises his role as Mr. Norfleet. The 1956 version also features a missing ring and the original premise of a valuable painting being stolen. Kenneth MacDonald and Christine McIntyre were the crooks in the original, but Kenneth is brought back solo for his new scenes. Christine is doubled in one scene.

Moe and Larry go it alone in two long scenes. Early at the mansion Shemp is absent, having missed his ride with the boys. When he (Palma) finally shows up, he's covered with pipes to hide his face! His one line of dialog--"Hold your Horses!"--is dubbed from The Ghost Talks (1949). Later Moe and Larry encounter MacDonald stealing the painting. (Shemp is conveniently upstairs working on the shower). A struggle ensues and the boys happen upon a table full of pies. That gives them a chance to start a pie fight with "guests" at the Norfleet estate. The guests have been absent until now. The guests getting creamed are lifted from Half-Wits Holiday (1947). Emil shows up in time to get creamed, himself. The boys manage to subdue MacDonald and a grateful Emil gets his painting back. The last shot has Moe wondering about Shemp's whereabouts and we see him surrounded in pipes (from Vagabond Loafers) calling out for help!
This is the one fake Shemp film that can be enjoyed, despite all the borrowed scenes and chicanery. It moves so well and all the recycled gags are great to see over again.

The last of these films, Commotion on the Ocean, is a more predictable remake of Dunked in the Deep (1949) with lots of stock footage and a few new scenes. The basic premise of the boys encountering foreign spy Bortch (Gene Roth in both versions) on a boat is reprised. This time we open with footage from Crime on Their Hands (1948), another great musical title taken from Time on my Hands). The boys are janitors and would be reporters working at a local paper. They get a tip about Bortch and off we go to Dunked in the Deep. Palma is involved in one transition scene holding his hands over his face. (Moe and Larry carry most of this scene.)

On the boat Moe and Larry go it alone. Shemp is out looking for food. The boys grab what they think is a fish--actually it is a wooden decoration--and share it with Bortch. We then get the old "coughing-up-sawdust" gag. When Shemp finally gets back, we follow the rest of the original, including Shemp's hilarious hammock scene with an ignited barrel looming below him). Moe has one new bit at the finale to tie up the new premise and appropriately Shemp gets the last gag.

Not long after this Novemer 1956 release, veteran comic Joe Besser was chosen to be the new Stooge. This would mercifully end the short era of the fake Shemp comedies. Despite the obvious chicanery, these shorts give us some unintentional laughs and amazement at the attempt to create new shorts despite Shemp's passing. And, of course, we get great doses of Columbia's never ending ability to utilize it's stock footage.

The Case of the Fake Shemp has been solved.

Video Update-Sony is working on the complete Stooges series on DVD. (The Fake Shemps should be eventually available,probably on Vol.8) There are also some independent DVD releases of all the comedies. Check eBay. For a great film capsule of all the Fake Shemp scenes, go to Youtube and check out DrOpOfahat. He has a great post and editing job on all the bogus scenes with Palma and their setup.
Posted by Pete Kelly's Blog at 9:47 AM