One of the most popular members of the Lawrence Welk Show is a wonderful trumpet player with an engaging singing style and great flair for comedy. His name is Bland "Rocky" Rockwell. Rocky has always been one of my favorite performers and I have had the pleasure of getting to know him personally. He's as friendly and upbeat as he appears on screen. Now 85 and widowed for 8 years, Rocky lives in Arizona and still performs as a vocalist and valve trombonist. 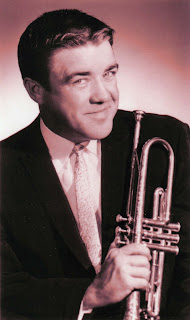 Despite numerous health problems he remains alert and always full of fun when we talk. Rocky has amazing recall of songs he sang, played, and clowned on during his 11 years on the Welk show.

His story begins in St. Joseph, Missouri where he was born on March 2, 1923. Rocky took to music class as a youngster and showed great ability to sing. When he was told his school band needed trumpet players, he was happy to volunteer. His dad, an electrician, bought Rocky a trumpet at a local pawn shop for $5, a hefty sum in depression days. Rocky was on his way to a career in music. Rocky's dad also introduced him to the many musical broadcasts on his crystal radio set. It was hard for him to tear himself away from the sounds of dance band broadcasts. Following high school and studies at Marysville StateTeachers College ,Rocky began working with territory bands, including a stint with Sonny Dunham. During WW2 Rocky played with the 765th AF Band and saw some time in Europe. While on leave, he married his high school sweetheart, Pauline Wood in 1943.

After the war, it was back to the road with more territory bands. In 1951, Rocky was working in Grand Island, Nebraska on station KMMJ with a polka band. Lawrence Welk happened to be in the area and was looking for a trumpet player. He asked Rocky to audition with the band in St.Joseph! Rocky immediately hopped on a milk train and got back to St. Joe for the date. Lawrence didn't realize that Rocky had all his family and friends in the audience. He got a great reception and was hired by Welk. At the dance Rocky sang Sunny side of the Street which would show Welk his importance as a personality, along with his musicianship. Rocky would be an integral part of the Welk band for the next 11 years.

The band worked their way west to the Aragon ballroom in Santa Monica, and while there started a series of local TV broadcasts that would set the stage for Welk's phenomenal network success. Rocky became a very popular member of the band at the ballroom and TV show with his fine trumpet work, comfortable on dixieland and swing, with a pretty tone, fluid phrasing and easy swing. His vocals, rhythmic and gravelly, recalled other great trumpeter/singers such as the great Louis Armstrong (one of Rocky's favorite musicians), Louis Prima and Scat Davis. Rocky's secret weapon was a great flair for comedy. He shined on the sketches and gags on the show. As he himself said, "You never know what I'll do, when the red light's on." One of Rocky's early signature tunes was I Love Girls. He would repeat it many times over the show's run. He also had a great impish face and crew cut which enhanced his comic style.

On the early shows Rocky showed his versatility doubling on trombone (along with section mates Norm Bailey and Woody Guidry). This experiment wasn't without humor as Rocky had to write out the slide positions on his music. One night at the Hollywood Palladium his slide got away from him and traveled across the dance floor! Thanks to YouTube and PBS Welk reruns we can still enjoy many of Rocky's finest moments.

As a trumpeter Rocky really shone. A 1955 rendition of Randolph St. Strut with the dixieland group shows his fine lead work and a very fleet solo. Larry Hooper also shows what a fine pianist he was with some nice striding. A 1958 big band version of Dipsy Doodle has a marvelous solo by Rocky. Following George Thow (another fine jazzman), he takes a fascinating half-chorus that is Bix-like but with inversions and quick fingerings that are downright boppish! One of my favorite vocal/trumpet routines is on the old favorite I Never Knew I Could Love Anybody. Rock takes a great vocal and a tasty Harmon mute solo. This arrangement was by big band veteran Joe Haymes, who contributed many charts to the early Welk band. On When I Take My Sugar to Tea Rocky goes English gentleman with top hat and ascot and has his trumpet brought out to him on a pillow! Rocky even did an hilarious Elvis impression, finally wrecking his guitar years before the Who. A special moment is on the Christmas show where Rocky played Rudolph for the kids with a cute hand puppet (made by Pauline) fingering the valves. It showed his ease with kids and his own child-like persona.

The man was a superb comic and handled every comedic assignment with the greatest of ease. He also worked well with "Champagne Lady" Alice Lon and bassist Buddy Hayes (another funny guy). One of the best Welk shows was the 1960 big band salute. Rocky had plenty to do with vocal group duties, an Ish Kabbibble imitation, a nice plunger spot on Mood Indigo and a great tribute to Louis on Sunny Side of the Street, capturing Louis' vocal style without being overly hammy as so many Armstrong imitators are. This is one of Rocky's personal favorite spots on the show.

The 1960 Welk band was the largest of his career with strings, five trumpets, four trombones and six saxes. Among the great soloists were George Thow, Warren Luening, Bob Havens, Don Bonnee, Russ Klein, Bill Page and Frank Scott. Also in 1960 Rocky played and sang on Welk's Dixieland album on Dot. Despite a repertoire of children's songs and ditties, the medium size band plays Heinie Beau's great charts with swing and true jazz style much in the way of the Bob Crosby bands.

By 1962 Rocky was ready to leave Welk and try his hand at a solo career. He formed a band that played the Vegas/Tahoe/Reno circuit and played a show that mixed jazz, comedy and standards.
Rocky sometimes opened for Louis Prima and delighted in driving Louis nuts by doing his specialties Oh Marie and Just a Gigolo. For a while former Mouseketeer and Welk Jr. band member Cubby O'Brien was Rocky's drummer. In 1970 Rocky returned to St. Joe to help his dad who was ill. He worked around St. Joe till '83. Then followed cruise work and a move to Sun City, Arizona and a long stay with the house band at the Wigwam resort.

Rocky had two children, a daughter Wynona and son Jeffrey. They both appeared on some of the Welk Christmas shows. Since losing Pauline in 2000, Rocky has worked and recorded with Steve Cooper's fine band from Chicago. He's on three tracks of one of Steve's CDs and does a great version of What a Wonderful World. Rocky can sing pretty tunes with the best of them! Rocky also sings and plays valve trombone with Rte. 66, an Arizona swing band. (He switched to valve trombone after a mouth infection ended his trumpet playing days).

Rocky guest hosted a 2002 Welk PBS show featuring a 1958 broadcast including himself. He made a great host and was full of great stories and anecdotes during the hour. He was also featured on the PBS special Lawrence Welk's TV Treasures. In 2008 Rocky was interviewed by Mary Lou Metzger for a rebroadcast of the 1960 big band show. His humor and reminicing were a highlight of the show.

At 85 and despite various health problems Rocky is still as upbeat and engaging as ever. I always feel so great after talking to him on the phone. He plans on doing some more recording with some of his Arizona friends.

Trumpeter-Vocalist-Comedian and one of the most genuine and talented people to grace a bandstand. That's Rocky. Keep swingin' Rock!
Posted by Pete Kelly's Blog at 9:08 AM 4 comments: