Next up in our Hollywood jazz series is a personal favorite, The Five Pennies, the story of jazz great and cornetist Loring "Red" Nichols (1905-65). Although a rather poor characterization of the real Nichols and his career, this film is nevertheless extremely entertaining and has many fine moments. 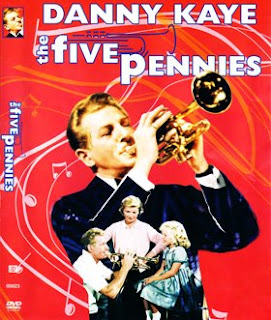 The real Red Nichols was an excellent cornetist who developed his own personal take on the Bix Beiderbecke style of playing. Red was also a consummate studio player and organizer and was one of the busiest jazzmen of the 1920s. He was not the cut-up and loose canon as played by Danny Kaye- rather a businesslike, pleasant, hard working musician. Many future jazz stars such as Jack Teagarden, the Dorseys, Benny Goodman, Glenn Miller and Gene Krupa worked for Red. However, the film makes up for it's faults with outstanding music ghosted by the real Nichols and by the great Louis Armstrong onscreen.

Although Kaye is given a few too many comic bits, he shows his dramatic range in the film's later stages when Red deals with his daughter's polio and temporarily drops out of music. (The scene where he throws his horn off a bridge into the water is a very powerful moment).

The movie was planned as early as 1954 as Intermission, based on a short story by Robert Smith who had written a Mickey Rooney film, Quicksand, that featured an appearance by Red and his band. Van Johnson was originally planned for the lead. In October of 1956, Red was the focus of TV's This Is your Life which brought his story to the public and reunited him with family and friends including music pals Jimmy Dorsey, Miff Mole, Jack and Charlie Teagarden, Artie Schutt, Vic Engle and Phil Harris. In December of 1956 Paramount began planning the Five Pennies film with Danny Kaye in the lead.

A host of real life musicians were also cast including Ray Anthony as Jimmy Dorsey, Bobby Troup as Artie Schutt and Shelly Manne as Dave Tough. (He would also play him in the Gene Krupa Story.) Glenn Miller was played by actor Ray Daley. There is also a rumor that Red himself made a cameo in the Cliquot Club Eskimo sequence. Due to Red's poor relations with Benny Goodman, his name was left out as was Gene Krupa's due to the upcoming bio on him.

Along with Red's cornet work and Louis' peerless horn and vocals were many contributions from some of Hollywood's finest arrangers and musicians. Their work made this film so memorable. Leith Stevens (former bandleader of the Saturday Nite Swing Club) was the musical director and co-ordinator of the score. The bulk of the jazz charts were done by Heinie Beau, an excellent clarinetist and arranger and a long time colleague of Red's. (He also contributed fine clarinet work). Heinie excelled at big band and Dixieland and did a great job recreating the Nichols sound. Also making contributions were Red's excellent pianist, Bobby Hammack, Lou Halme, Benny Carter (also alto solos) and Alexander Courage (later of Star Trek fame).

Danny's wife, Sylvia Fine, who wrote a lot of his special material, wrote four new songs for the film. Goodnight-Sleep Tight, Five Pennies and Lullaby in Ragtime were all cleverly worked into a round sung by Danny, Louis and the talented young Miss Gordon. 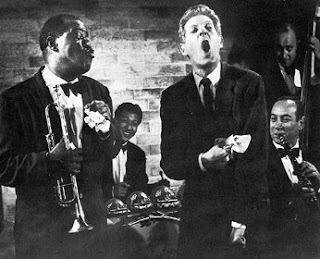 (She beat out 500 girls for the part!) The other tune, Follow the Leader, is a fun Charleston number performed at a college dance sequence. Her special lyrics to the Saints sung by Danny and Louis is one of the films' finest numbers, even though it has nothing to do with Red. The clever lines throw in all kinds of references to classical composers: Do you dig Rachmaninoff?-On and Off; Put Listz on that List; Gustav Mahler-Don't forget Fats Waller etc.). Louis and Danny also performed the number on a USO Christmas show in late 1958 (a warm up for the movie) and on Danny's October 1960 special.

The film was directed by Mel Shavelson who also co-wrote the screenplay with Jack Rose. The basis of the story is Red's arrival in NYC from Ogden, Utah in 1924 to seek his fortune as a jazzman and dance band musician. His meeting with Louis Armstrong, vocalist Bobbie Meredith (soon to be his wife) and sax man turned manager, Tony Valani, are the core of the story. A true life incident saw Red and Bobbie's daughter, Dorothy, contract polio and Red's semi-retirement from music to care for her. He did some defense work during the war but also played part-time and did some recording for Capitol and transcriptions. He also had a short stint with the Casa Loma Orch. in early 1944.(In the film he has given up music completely).

The later scenes where Red makes his comeback in music are nicely played by Kaye, Bel Geddes and Tuesday Weld as the teenager, Dorothy. On This Is your Life, Dorothy mentioned how she surprised Red on one of his club dates by getting out on the dance floor. (Her medical condition had improved). This touching scene is reprised in the film's finale. The scenes with Louis and Red's other musician pals making Red's dubious club opening a smash is predicable Hollywood, but still very effective. At times one thinks it's the Danny Kaye Show and not the story of Red Nichols. However, Louis shines in all his scenes; the man was a natural actor. (Occasionally in films like Glory Alley and A Man Called Adam he was given meatier parts). Pops shows his keen comic timing throughout, especially in the scene when Red tries to sit in at Pops' gig, a bit tipsy from drink. When Red proclaims himself the "greatest cornet player in Ogden, Utah," Louis retorts, "North Ogden or South Ogden?" Red's great version of Battle Hymn of the Republic is heard in this sequence along with a super Louis take on After You've Gone.(When Red and Louis did met in the 20s, they engaged in friendly sessions trading ideas and styles).

The music is the film's solid selling point and it doesn't disappoint. Red's own cornet playing is a standout. Approaching age 54 , Red never sounded better. His brassy melodic tones are heard to advantage as his mid 50s Capitol recordings attest. The Armstrong vocals and solos along with the top studio men are so wonderful that the film's shortcomings are quickly forgotten. Many great standards are heard including JaDa, Indiana, That's a Plenty and Bill Bailey.

Dot records released the soundtrack LP of most of the musical highlights in 1959. (It's now on CD through Universal/Decca-Broadway). The film bolstered Red's career greatly. (He was working around L.A. and recording for Capitol). Red himself made a wonderful album for Capitol in April 1959 called Meet the Five Pennies featuring many of the films studio men, arrangements by Heinie Beau and most of the songs from the film. It is out of print but worth hunting for. (Red's Capitol output would make a great Mosaic set). Red passed on in June of 1965 while playing a date in Las Vegas.

Also worth noting is the Castle Jazz Band Plays the Five Pennies (Good Time Jazz, 1959). This excellent trad band led by banjoist/vocalist Monte Ballou made two reunion LPs for GTJ in 1957 and 1959. Don Kinch, George Bruns, Bob Short and Co. do great work on the standards and fine originals. GTJ put it on CD, but it is currently out of print. (Ebay or a used CD store are the best bets). The DVD of the film is available from Paramount.

The Five Pennies is great entertainment with wonderful music. Don't expect an accurate, historical portrait of Red Nichols. You'll still be entertained and with Red Nichol's music, Danny Kaye, Louis Armstrong and such a wonderful cast, you can't go wrong.

Special thanks to Steve Cooper of Chicago, a fine trumpeter and bandleader. Steve is an expert player and historian of Red's music and I appreciate his input on this post.

These Five Pennies will give you Dividends of Delight!
Posted by Pete Kelly's Blog at 3:09 PM 1 comment: