In the course of our post on Scobey and Clancy Raid the Juke Box, we mentioned this wonderful album. Bing with a Beat is certainly one of the jazz highlights of Bing's illustrious career and an equally fine addition to the prolific Bob Scobey discography. We can thank Will Friedwald and his great book Jazz Singers (Scribner's 1990) for bringing this session some latter day prominence.

Bing seemed at his happiest in the company of jazz players and singers (Louis, Bix, Boswells, Teagarden, Bob Cats to name a few). He also gave out with some of his best work in such company. 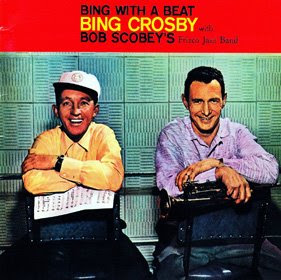 Bob Scobey's albums for RCA (1957-60) started out more commercially with a Bob Crosby flair and many studio pros added to the Frisco Jazz Band. (Matty Matlock and Bill Stegmeyer, Crosby veterans arranged some of them). Eventually the smaller Frisco band came back on the later RCAs. The meeting with Bing used a slightly enlarged band arranged by Matlock (also a favorite arranger of Bing's). The result is structured but still allows for many free-wheeling ensembles and solo spots by Bob, Matty, Abe Lincoln and Ralph Sutton.

Bing in turn gives out with some of his richest tones, jazziest phrases and cleverest jibes. Our only regret is that the producers didn't have the foresight to give Bing and Clancy Hayes a vocal duet. (Clancy strums rhythm guitar throughout). This would have been a great treat for fans of both singers. (I'm sure they both admired each other's work.)

The session was recorded on February 19 and 20, 1957 with Bob and Frank Beach-trumpets, Abe Lincoln-trombone, Matty Matlock-clarinet and arranger, Ralph Sutton-piano, Clancy Hayes-guitar, Red Callendar-bass, Dave Harris-tenor sax, Nick Fatool-drums. The tunes are a mixture of old favorites and some little heard evergreens. Here's the Playlist:

Let a Smile Be Your Umbrella- The album starts with the first of many verses sung by Bing with Nick's rimshots and Ralph's piano comps as backup. Bob leads the band on a spirited ensemble with a Bud Freeman-ish tenor spot by Dave Harris (a talented studio man, once with the Raymond Scott Quintette). This is a nice Bob Crosby-like chart by Matty and a great opener.

I'm Gonna Sit Right Down and Write Myself a Letter- After a nice intro by Frank Beach (another great studio pro), Bing sings the rarely heard verse before going into tempo with nice obligatto by Bob, who leads a swinging ensemble followed by Ralph's Waller inspired solo. Bing closes with some special patter complimenting the boys.
Along the Way to Waikkiki- A real old timer by Richard Whiting and Gus Kahn from 1917. Bing had an affinity for Hawaiian tunes and this relaxed tune is given a nice ride thanks to Matty's chart with more Scobey horn and Sutton piano. Matty also uses a favorite Bob Cats device, the clarinet/tenor voicing.

Exactly like You- The great Jimmy McHugh standard is in good hands with Bing, Bob and Matty. The clever intro riff is later repeated as a scat spot for Bing. Bob and Ralph get solo honors. (Ralph was a regular member of the Scobey band at the time.)

Dream a Little Dream of Me- Made popular by Louis and Ella, this goodie gets a lovely ballad rendering by Bing. During Bob's solo Bing gets off some of his loose funnies-"You ain't Dreamin', You is Awake!" On the out chorus Bing throws a litle gravel in his voice for effect and hits a nice low ending (shades of Larry Hooper-that's for the Welk fans).

Last Night on the Back Porch- A 1914 chestnut gets a swinging Matlock arrangement. Bing gives another nice verse and Bob and the boys swing nicely with some Abe Lincoln trombone to boot. More classic Crosby chatter-"I gave her my Frat Pin" and "Maw went Shoppin'" keep things loose. The band coda is right out of the Bob Crosby book.

Some Sunny Day- A very breezy Bing with some more gravel on this Irving Berlin tune. Dave Harris gets into an Eddie Miller mood (with a few modern touches) and Matty has a nice spot.

Whispering- Made popular by Bing's old boss, Paul Whiteman. Bing counts in to the verse. During Bob's driving solo, Bing has some more cute lines.

Tell Me- A very pretty oldie. (The Original Dixieland Jazz Band recorded it in 1920). A nice Matlock dance chart with muted brass and double clarinets and more Miller-ish tenor. The tune also appeared in the films For Me and My Gal and On Moonlight Bay.

Mack the Knife- Bing gives us a sighing count off with more cute comments. Bob has some tangy solos and obliggato. Matty uses a clever Coal Cart Blues riff on the out chorus in homage to Louis.

Down among the Sheltering Palms- Another mellow Matlock chart with Bing on the pretty verse and backed by more muted brass and clarinets on the chorus. Bob's solo is very pretty and burnished with nice brushwork by Nick.

Mama Loves Papa- We close out the show with the opening verse routine of rimshot and piano. Bing's at his jazziest best. Bob and the band have a great jam chorus with some more Sutton piano. Bing's comments are classic- "So Shangri." (as in Shangri-La) and "Mater loves Pater.".A fun finale to a wonderful album.

This is a great session for jazz fans and fans of great jazz singing. If you're not familiar with Bing's jazz side or the Scobey horn, you're in for a treat.

The CD is available from Bluebird.

Till next time- Keep Bingin' with a Beat

Addendum- Would also like to mention an exellent album Bob made in 1955 for Contemporary with Claire Austin. Claire was a housewife who had a talent for blues and jazz and worked and recorded with Turk Murphy in the early 50s. This session finds her in a Lee Wiley-Mildred Bailey type groove singing some great standards backed by Stan Wrightsman, piano- Morty Corb, bass- Shelly Manne, drums and Bob, trumpet. Bob gets in some beautiful solos and obligattos and Claire's singing is rich and warm.
The Contemporary CD also includes a 10 inch lp session Claire made with Kid Ory in 1954.
Posted by Pete Kelly's Blog at 2:37 PM 1 comment: