Time to revisit another classic Stooges short. Three Little Pirates is one of the best entries 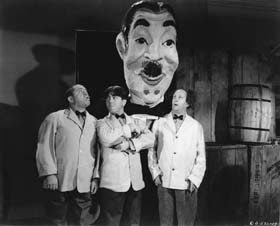 of the 1945-6 period when Curly's health was declining and eventually forced his retirement from the act. As director Ed Bernds recalls, "Curly's energy went up and down with each short." Although his voice is tired and features haggard, Curly puts in a great performance and is able to carry his share of the comic workload.

The boys play three shipwrecked sailors who have landed on Dead Man's Island. Governor Vernon Dent is about to do away with them when lovely Rita (Christine McIntyre) intervenes and helps the boys in exchange for escape from the island. Posing as rich wayfarers with gifts for the governor, the boys get to do their classic "Maha" routine. This was a staple of their vaudeville days. The Stooges' first filmed version of the skit is in the Columbia feature Time out for Rhythm (1941) featuring a much healthier Curly. They would repeat the routine on TV with Shemp and Curly Joe . Even Mike Douglas got to take a turn when Moe guested on his TV show. Check it out on Youtube.

Curly, wearing regal robes, a turban and coke bottle glasses responds to all of Moe's questions with a barrage of gibberish, including some choice Yiddish words: "Maha? Aha!" etc. etc. When the governor finds out about the ruse, he sends word to his buddy, Black Louie the Pirate. The boys and Rita are heading to Louie's joint to get some quick passage money. A wild series of vignettes ensue, first with a game of knife-throwing between Louie (Robert Stevens) and Curly with Larry as a human target! Producer Jules White gets in one of his patented violent gags when one of Curly's errant throws gets an old buccaneer in the side!

Finally the Stooges and Rita take on all the pirates, pulling out all the stops with all kinds of great gags including a giant hammer attached to the pinball machine! After winning the fight in typical Stooge style, Moe declares himself emperor, only to be crowned by the hammer and the boys exit with some choice Maha words.

Christine McIntyre was a lovely lady with great comic timing. She was a favorite of not only the Stooges, but many of the other Columbia comics. She and Columbia stalwart Vernon Dent work extremely well with the boys in this short. Curly's next short, Half-Wits Holiday, would be his last. He suffered a fatal stroke during the filming and was eventually replaced by brother Shemp. This outing is a great penultimate performance.

Three Little Pirates is available on Vol.5 of Sony's Three Stooges Collection.
Posted by Pete Kelly's Blog at 10:58 AM

Jerry's stroke on the set of Half-Wits Holiday was not fatal. He recovered enough to appear in Hold That Lion, to marry (yet again) and to father a child. The fatal stroke took place in 1952, I believe.