One of the great tragedies in recording history is that Louis Armstrong never got to make a full Christmas album. Louis embodied all the joys, warmth and sacred beauty of the season.

Pops loved Christmas- one of the most famous stories is his fascination with a Christmas tree that his wife Lucille brought on tour. Louis insisted the tree stay up long after the season was over. I'm sure that Louis played many Christmas requests in person, but none seem to have been recorded. We do have some lovely singles Louis recorded for Decca along with a few other seasonal songs. This post will celebrate these joyous Christmas offerings. 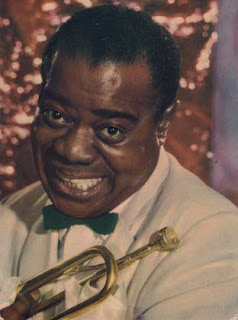 Louis' earliest Christmas recording is the Clarence Williams Blue Five session of Oct. 1925 at Okeh records.He recorded two versions of Santa Claus Blues a tune written by Chicago bandleader Charlie Straight and Gus Kahn. On Oct. 8 the full band backs up vocalist Eva Taylor in a spirited version. Louis is already experimenting with the higher register of the horn and Buster Bailey on soprano is impressive thruout. (he would join Louis' All Stars in 1965). On the 16th Louis accompanied Clarence, Eva and Clarence Todd's vocal in a slow version of the tune with just Williams' piano and Buddy Christian on banjo. Louis' phrasing is typical of the wonderful blues accompaniments he took part in during this period.

We fast forward to September 22,1952 and a studio session at Decca records. Louis is backed by the studio band and arrangements of Gordon Jenkins. Jenkins was an unabashed admirer of Pops and created lovely and inspired commercial charts for Louis. Recorded at the session were the seasonal favorites White Christmas and Winter Wonderland. Louis doesn't play on these selections but his vocals are especially warm and well recorded. The vocal on White Christmas is fairly straight backed by Jenkins' lovely string writing. On Winter Wonderland Louis has a beautiful scat coda and Marty Napolean gives us some one finger piano melody (a Jenkins trademark). Napolean, Arvell Shaw(bass), Cozy Cole(drums) and Bob McCracken(clarinet) were members of Louis' All Stars of the time. (they augment the studio players). A lovely example of Pops'ability to combine simplicity with virtuosity.

The next Christmas session for Pops was on Oct. 22,1953 at Decca again. Backing Louis was the Commanders, a popular swing band led by drummer Ed Grady and here using an all star studio lineup including Billy Butterfield, Lou Mc Garity, Cutty Cutshall, Hymie Schertzer, Al Klink, Bernie Leighton and Carmen Mastren. The band had a brassy sound to it with 3 trumpets and 4 trombones, the charts were by Toots Camarata( he had backed up Louis with Jimmy Dorsey's band in 1936). The Christmas songs recorded were two novelties, 'Zat You,Santa Claus? and Cool Yule (written by Steve Allen).

'Zat You is a fun minor key novelty in the style of Old Man Mose and Skeleton in the Closet.There are some fun sound effects simulating the cold wind and knocking on Louis' cabin. Louis has a lot of fun and the band swings hard Cool Yule swings along in shuffle rhythm and another homage to Santa.There are cute lyrics including Santa taking a lick on a peppermint stick. Louis gets in some trumpet too and wails for a half chorus in great style, his stop time stuff on the bridge is classic Pops.This entire session had great Louis horn and vocals and Camarata's fine charts and a great studio band(that big bone section is very prominent on Yule) put the tunes over in fine style.

The next Christmas recording was back at Decca on Sept. 8, 1955 with a solid studio band arranged and conducted by the great Benny Carter. Louis' regular band (Trummy Young, Barney Bigard, Billy Kyle, Arvell Shaw and Barrett Deems) were also part of the studio band.
The two Christmas selections were Christmas in New Orleans (a novelty written for the session) and a Raymond Scott favorite Christmas Night in Harlem.
New Orleans is a cute novelty with Pops' having fun talking about a Basin St. Santa (the tune is a bit of a Basin St. clone)and barefoot choir, he also gets in a solid trumpet solo. Carter's charts are well crafted and swinging, as is his custom. Harlem (a Jack Teagarden-Johnny Mercer favorite) swings nicely with Louis getting in some great scat and a burnished,swinging horn solo. Trummy and Barney can he heard getting in some licks.
Also recorded at the session was Moments to Remember, a current hit for the Four Lads. It's popped up on some of Louis' Christmas compilations due to it's opening New Year's line. It's a lovely tune and Pops' vocal and horn are backed up by a pretty Carter arrangement.

We have to wait until may 26, 1970 for the next Christmas tune. While recording the Flying Dutchman lp Louis and his Friends, the selection Here's My Heart for Christmas was recorded for use as a single. The tune was written by George Weiss (composer of What a Wonderful World) and gets a tender reading from Louis with nice backing by James Spaulding(flute) and Frank Owens(piano). Oliver Nelson was the arranger/conductor. Louis was recuperating from a fatal illness and does not play trumpet on the session.

Louis' last studio recording was a delightful reading of The Night Before Christmas. Pops recorded the poem in his home studio on Feb. 26,1971. Although his health was still shaky, Louis was back to playing trumpet and in the midst of his last engagement.
Although there's no singing or trumpet, Pops' narrative is delightful and swings in it's own way. His 1938 Decca recordings of Elder Eatmore's Sermons show his talent as a monologist. He gets in some of his own phrases and personal touches. (he dedicates the reading to "all the kids").
The poem was released as a single by Continental Records backed by a version of The Saints from the 1968 BBC TV show issued on Brunswick. This is a lovely and charming coda to Louis' recording career. Some versions of the poem dubbed in some irritating music behind Louis.
There is also a nice version of Pops and the All-Stars playing Auld Lang Syne from a New Years' Eve broadcast of 1954 at the Down Beat in San Francisco. Louis plays the perennial with his beautiful solemn lead, it's nice to have this version. Another seasonal song that gets packaged in Louis' Christmas compilations is his duet with Velma Middleton on Baby, It's Cold Outside. This was a fun routine that wasn't recoded commercially but exists on many live releases.

The 6 Decca sides are available on the Hip-O CD, What a Wonderful Christmas. Along with Louis there are single sides by Louis Jordan, Peggy Lee, Lionel Hampton, Mel Torme, Lena Horne, Duke Ellington, Eartha Kitt and Dinah Washington. It makes for nice Holiday listening.
The budget Laserlight label offers Christmas through the Years and includes Santa Claus Blues, Baby It's Cold, Nite before Christmas , Zat You and some non-Christmas sides by Louis.
Louis' great Verve duet with Ella Fitzgerald on I've got my Love to Keep me Warm has popped up on Music Choice TV a lot and most of the sides can be heard on Youtube.

Everyday is Christmas when you watch or listen to Louis Armstrong's music.
Happy Holidays from Pete Kelly's Blog.