This post celebrates the career and music of cornetist Andy Secrest (1907-77) , a very competent jazz and dance band musician who possessed a unique talent, an uncanny ability to sound like his idol, Bix Beiderbecke. This talent brought him into the Paul Whiteman Orchestra at the tender age of 21.
Although he has been unfairly labeled a Bix copier, he managed to carve out a nice career and later develop a mature style of his own. This post will explore that interesting career. 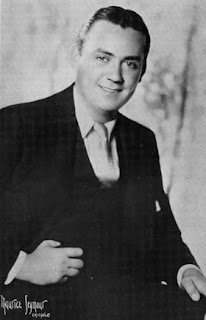 In the 1920s most trumpeters and cornetists were under the spell of Louis Armstrong for obvious reasons. However, Bix Beiderbecke had a large number of musical followers including Jimmy McPartland(who replaced Bix in the Wolverines and came very close to his sound), Sterling Bose, Leo Mc Conville, Bob Mayhew, Chealsea Quealey and Secrest. (to name but a few).

Like Bix, Andy was a midwesterner, born in Muncie,Indiana. From his teen years he worked with various midwest territory bands gaining great experience as a jazzman and dance band musician. He made his recording debut with a Hoagy Carmichael band session for Gennett in Oct. 1927. Hoagy of corse was a great friend of Bix and I'm sure appreciated Andy's Bixian tones.While with a group called the Indiana Royal Peacock Orchestra, he recorded for Victor under the name of Jean Goldkette, who Bix had worked for. This session in Dec. 1927 produced a side Here Comes the Showboat that featured some Bix-like trading between him and Sterling Bose. Secrest did further work for Goldkette in 1928 along with free-lancing. Word of his abilities reached Paul Whiteman who was looking for a temporary replacement for Bix who was rehabbing from his alchohol problems. (This was in Dec. of 1928).
Secrest joined Whiteman in Jan. of 1929. Not only was he a capable jazzman but he was a sure reader and section man, not a strong suit with Bix. Secrest, like many of the aforementioned players, never tried to copy Bix, but were so influenced by him that their sound was very similar to the master's. He didn't have Bix's great harmonic sense or jazz ideas but was a very capable player in the idiom and his Whiteman and Frank Trumbauer Orch. solos have fooled many historians who though it was Bix. (Bix had lost a bit of his luster due to drink and was still capable of producing great solos but sometimes would sound rather ordinary.)

When Bix returned to the Whiteman Orch. in Feb. of 1929, Andy was retained. Whiteman obviously appreciated his talents and wanted to have him in place in case Bix wasn't up to the rigors of the band's schedule. Bix, of course, resumed his work with Frank Trumbauer's recording units, although Tram used Andy too, most likely as a safeguard plus utilizing Secrests' abilities as a leadman. These Trumbauer sessions have caused confusion as to who is playing what, although Bix still had the bulk of the solo spots with Andy filling in here and there. In March and April of 1929, Bix and Andy were on 7 sides by the Trumbauer band. Bix still has the majority of solos but Andy also has some spots and their sounds are both very close at this point.
Baby, Won't You Please Come Home? (4/17/29) has caused the most confusion over the years. We now know that Andy plays lead and the verse and Bix backs Tram's vocal and takes the solo. After the April 30 session Bix dropped out of the Trumbauer sides to conserve his energy for the Whiteman band. Andy would take over the solo duties on the Trumbauer sessions.
Andy's work on the post Bix-Trumbauer(1929-30) sides shows a very capable jazz cornetist. Although not the brilliant improviser that Bix was, he holds his own on sides such as Nobody but You, Shivery Stomp, Turn on the Heat, My Sweeter than Sweet and especially on Hoagy Carmichael's Manhattan Rag. This selection obviously intended for Bix gives Secrest much to do and he rises to the occasion.

Bix continued with Whiteman until Sept. of 1929. He still produced classic solos such as China Boy, Oh! Miss Hannah and Reaching for Someone. After the session of Sept. 13, he returned to Davenport to rehab once again. Bix wouldn't return to Whiteman and Andy assumed the role of cornet soloist in the orchestra.

His work with Whiteman during the 1929-30 period also shows his solid and ever improving solo ability. For years the solos on Nobody's Sweetheart and Great Day were thought to be by Bix. The Great Day solo is very adventurous with some descending phrases and a neat shake, more from the Louis style. Andy also has nice spots on After You've Gone and If I Had a Talking Picture of You. He also appeared with the band in the film King of Jazz (1930); however, he had little to do musically. He continued with Whiteman until 1932. An Eddie Lang session of Oct. 1929 has one of Andy's finest solos on Walkin' the Dog(very Bix-like).

From 1932-3 Andy worked with the popular Ted Weems band. The Weems band of this time played a lot of hot music. At this writing we don't have any recordings from Andy's stay with Weems but hope to do an addendum when we locate some. After some work with Rudy Vallee, Andy drifted into the Hollywood studio scene. His flair for jazz and orchestra experience made him the perfect studio musician. He worked a lot for Victor Young and John Scott Trotter. Ironically, the Trotter association brought him into several Bing Crosby recordings and programs. Bing, of course, was a former Whiteman bandmate. Smarty, recorded with Bing in 1937, shows a more mature Secrest with hints of Bix, Red Nichols and his own tasty touches. On Basin St. Blues with Connee Boswell (1937) Andy gets off a lovely solo with some hints of Louis. (What horn man didn't love Louis?) A Bing version of Aren't You Glad You're You has a solo that sounds like Andy, too. (circa 1942).

Andy also had a short stint with the Ben Pollack band in the spring of 1938. Two Decca sides, After You've Gone and Looking thru the World with Rose Colored Glasses, feature his tasty solo work. Bio. information on Andy is sketchy. We don't know if he married or had a family. We do know that he had a stint in the Coast Guard during WW2. A 1/1/43 Down Beat shows Andy in uniform guesting on Ginny Simms' radio show. (She featured guest service musicians.)

Thanks to good friend and collector Ed Reynolds of Wakefield, Mass. I was able to hear a fascinating recording in the Secrest collection. A Hollywood producer and jazz fan named Boris Rose put together a private session around 1944 or 45. Along with Andy were fellow Hollywood studio pros Joe Yukl, trombone, Peyton LeGere, clarinet, Stan Wrightsman, piano, Ed Scrirerick, bass, and Nick Fatool; drums. The sides recorded were Samandy Stomp (perhaps a play on words for Andy?) and Jive for Jeeves. Samandy has a Jazz Band Ball type feel with Andy's Bix/Nichols-ish horn proudly leading the way. The surprise is Jeeves, a typical riff tune of the 40s. Andy does a cornet-drum duet with Nick right out of the Harry James book. This type of versatility must have made him a very popular studio man. In the fall of 1949 , Andy recorded a session at Capitol co-led by Nappy Lamare(banjo/guitar) and Marvin Ash(piano). Also in the band were Irving Verret(trombone), Eddie Miller(tenor), Country Washburn(tuba/bass) and Zutty Singleton(drums). Andy sounds more into his Red Nichols vein here, especially his proud, strutting lead on Washington and Lee Swing. On How Come You Do Me , he's more bluesy with a nice growl passage. Sweethearts on Parade has some of the Bix touch along with fine leadwork.

In the 50s Andy continued working the Hollywood studio and jazz scene. He popped up on a few of the Gene Norman dixieland festivals. (I believe one of his sessions was recorded by Decca).
By the late 50s he had dropped out of music and was working in real estate. He died in California in 1977. We wish we had more bio. info on Andy but highly recommend Tom Pletcher's In a Myth site devoted to Bix and his associates along with the Bixology Discussion Group. (There are several articles on Andy). Here's hoping this post brings some long overdue attention to a fine jazzman who overcame the Bix-copier tag and produced some wonderful recordings.

I'm sure Bix would approve.

CD- Notes:The 1927 Hoagy session is on Timeless CBC 1011
The post Bix Trumbauer sides and some by Whiteman are on The OLd Masters 107-9 , Frank Trumbauer. Mosaic also has an exellent Bix/Tram/Teagarden set with Andy's Trumbauer sides.
The Basin St. with Bing and Connee Boswell is on Decca Jazz- Bing and some Jazz Friends.
The Whiteman and Trumbauer sides with Bix are all on Bix Restored. (try Amazon). The 1949 Capitol session is part of the Mosaic Records' Capitol Small Group Sessions anthology.
Posted by Pete Kelly's Blog at 10:36 AM

Hello Pete. I enjoyed your blog and your mention of my grandfather, Irvin Verret. Currently, I am doing some research on him and enjoy seeing his name mentioned. If you have any other information on Irvin Verret, I would greatly appreciate anything to come my way. Thanks again. Michele Verret (Ayala)