Continuing our Hollywood jazz bios, we come to another personal favorite, The Gene Krupa Story. This 1959 Columbia release has the usual Hollywood cliches , unintentional laughs and the most historical gaffes of any of the bios. (Miller, Nichols , Goodman , et al). 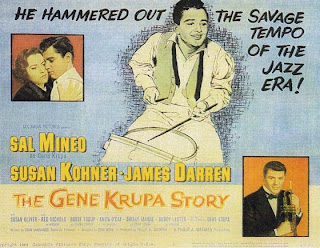 However, the film gets high marks for a powerhouse per-formance from Sal Mineo as Gene. A drummer himself, he captures the technique and mannerisms of Gene to a tee. We also benefit from Gene's own soundtrack work and the contributions of Musical Director Leith Stevens and Arranger Heinie Beau. (both worked on The Five Pennies that year).

Gene(1909-73) of course opened the door for drums in jazz as a solo instrument. His great technique, swing and personality made him the perfect benchmark for drummers. (as Louis was to trumpet ,vocals and swing conception).). Gene also led one of the top bands of the swing era. His 1941-2 unit featuring Roy Eldridge and Ania O'Day was one of the era's finest.

The film was produced by Phil Waxman , directed by Don Weis with screenplay by the associate producer Orin Jannings. Mineo's co-star was lovely Susan Kohner. She gave an excellent performance as Ethel Maguire, Gene's girlfriend and first wife. (they were married for 20 years , she passed away in 1955). Susan resembled Natalie Wood a bit and had great chemistry with Sal as the long-suffering ladyfriend. She left acting early to marry menswear mogul John Weitz. 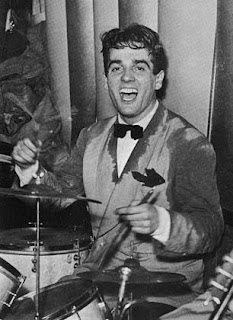 Also cast was pianist Bobby Troup as Tommy Dorsey , he looked a bit like Tommy. (in the 5 Pennies he played pianist Artie Schutt). The great drummer Shelly Manne plays Dave Tough. (he played him in the 5 Pennies too). Red Nichols , who gave Gene a lot of work in the early days plays himself. (surprisingly , we see the Red of 1959 with silver hair and crewcut!). For some reason comedian Buddy Lester shows up in a party scene that also features a cameo by Anita O'Day. Gene himself had appeared in the Glenn Miller Story and had a meaty role in the Benny Goodman Story. Apparently budget-consious Columbia didn't make an effort to engage Benny Goodman.

The story opens in Chicago of 1927 as Gene is starting to make a name for himself with local Chicago jazz players. (no mention of the Austin High gang or any real musicians of the day). Gene's parents want him to be a priest (a real part of his life) , but his love for music is too strong. In an early jam session scene we hear a lively version of Royal Garden Blues. Gene has taken over Dave Tough's chair. (Dave was a great Chicago drummer who later played with many of the great Big Bands).

One of the first of many gaffes has Gene and the band at a clambake where Darren sings a very Sinatra-like version of Let There be Love. (very nice, but this is 1927!). At the clambake Gene is pursued by a comely socialite. (Yvonne Craig-later of Batgirl fame). Eddie's girl Ethel starts to fall for Gene and the romance escalates. After the death of Gene's father , he tries the seminary but quickly drifts back into jazz to the regret of his mom. During a speakeasy sequence we get a nice version of Way down Yonder in New Orleans. Gene and Eddie decide to seek their musical fortunes in New York.

At a jazz party Gene gets to sit in with Red Nichols and the Dorsey Bros.(played by actors). The version of Indiana is a good one with nice licks by Gene, Red and Heinie Beau (on the soundtrack). Red is impressed with Gene's work and promises him some work. In the film we see Gene get a pit job in the show Strike Up the Band which Red contracted. We also meet Darissa , a popular singer of the day who initially dislikes Gene then begins an affair with him. (she hangs around as Gene's band vocalist). At this point of the film Gene is briefly introduced to marijuana, soon to be a stumbling block in his career.

A corny but effective scene has Gene playing a club date and receiving a letter from his mother disapproving of his lifestyle. Gene puts the letter on his drum and starts a solo that builds up with the crowd chanting Go, Gene, Go. Gene cries out- Here that, Mama, They're yellin' for your Boy, They approve-- typical Hollywood, but a lot of fun. At this point Speaker Willis enters as Gene's manager and he and Ethel drift apart. A montage scene includes real bands Gene worked with in the early 30s including Bix Beiderbecke, Mal Hallett, Irving Aaronson, Russ Columbo, Buddy Rogers and finally Benny Goodman in 1934. There are no sequences of Gene with the Goodman band.

Next, Gene decides to start his own big band. (This occurred in March of 1938). Gene throws a party and we hear Anita O'Day sing Memories of You. However she doesn't join the Krupa band! Also at this party Bunny Berigan, Frank Trumbauer and Bix Beiderbecke show up. (Bix had died in 1931!). At the party Gene puffs on a reefer to relax.

The next sequence shows Gene with his big band and is an excellent re-creation of one of his stage shows. During the version of Indiana the band members answer Gene's licks on small tom-toms attached to their bandstands. This was a real Krupa showstopper in the swing years.


Gene is riding high during the swing years but a marijuana possession wrap curtails his ride. (This was a real life low in Gene's career). He has to scrap the band and get legal representation. Darissa, who can help erase the wrap, bails out on Gene. There is a touching scene where Gene receives a call from his Mom offering her support. Gene has to serve a 90 day sentence. The real case got a lot of bad press and hurt Gene's career. In the film we get the usual Hollywood cliches of Gene playing with corny bands and in a strip joint. Ethel comes back into the picture to give Gene her support and suggest he try out with a new band Tommy Dorsey is forming. (In real life Gene made his comeback with Goodman (1943), then joined Dorsey for a while (thru 1944).


Gene met with Dorsey (Troup) who already has Dave Tough on drums. (He was actually with Woody Herman at this point). However, Eddie (conveniently playing with Tommy) suggests Gene be booked as a special guest for Tommy's Paramount Theatre opener. Gene gets mixed reaction from the crowd. We hear chants of Got a Reefer?, Hey Jailbird and Smoke One for Me. On Hawaiian War Chant Gene drops his sticks in mid-solo. Dave Tough gives Gene some support and the two trade passages and Gene recovers to give an electrifying solo getting the crowd yelling Go, Gene, Go! once again as the band seques into Cherokee for a fitting climax.


After a jovial reunion with the musicians backstage, Gene runs after Ethel. This time he's not going to lose her and the film ends on a happy note.


Gene himself left us with a great legacy of recordings and also appeared in many short films, features and TV shows.(Youtube has a large sampling) An interesting sidelight to the film was a Columbia promotional short called Jammin' with Gene in which Sal Mineo meets Gene on the set and trades drum licks with Gene. It's worth searching out on Ebay or Youtube. The Gene Krupa Story was available for years on VHS, has had some DVD distribution, but may be hard to find. (Try Amazon). Verve also issued a soundtrack lp which is long out of print. (again, try Ebay).


Special thanks to a good friend and great drummer, Steve Taddeo for his input. Steve is the keeper of the Krupa flame in New England. Check him out on Youtube under Seacoast Stompers. Despite it's flaws and innacuracies, The Gene Krupa Story offers solid entertainment and great music.


Until next time- Keep Swingin'
Posted by Pete Kelly's Blog at 10:31 AM